I’ve been writing a lot using both RMarkdown and Markdown lately. In the past I would typically default to RMarkdown because that’s the default in RStudio, but more recently I’ve been writing some pretty math-heavy documents and wanted something that could render them in real-time. This led me to Haroopad, which has mostly worked really well (with the exception of crashing so hard once that it actually deleted a previously saved version of the document I was working on), but alas, it doesn’t recognize the chunks of code I put in my Rmarkdown docs.

Enter editR, which purports to bring real-time rendering to Rmarkdown documents. I’m about to give it a try.

And it works! This opened a browser tab with two vertically delimited panes:

On the left is the editor pane, where text and code can be edited in-situ, and on the right is the rendered document–plots, tables and all. Like any shiny application, this wholly occupies the current R session while editR is open.

That’s all the exploring I’ll do for now. Bottom line: this appears to work, but it’s still in beta and should probably not be relied upon too heavily. I wonder if this will ever be implemented in RStudio.

edit (some time later): After playing around with editR for a little while, I find it likes to crash wayyy to often for me to consider it useful. Yihui Xie’s servr can apparently do real-time rendering as well. I can’t speak to its functionality, but I may try it in the future. 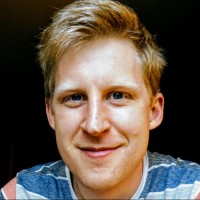 I use statistics to learn about rivers from space.